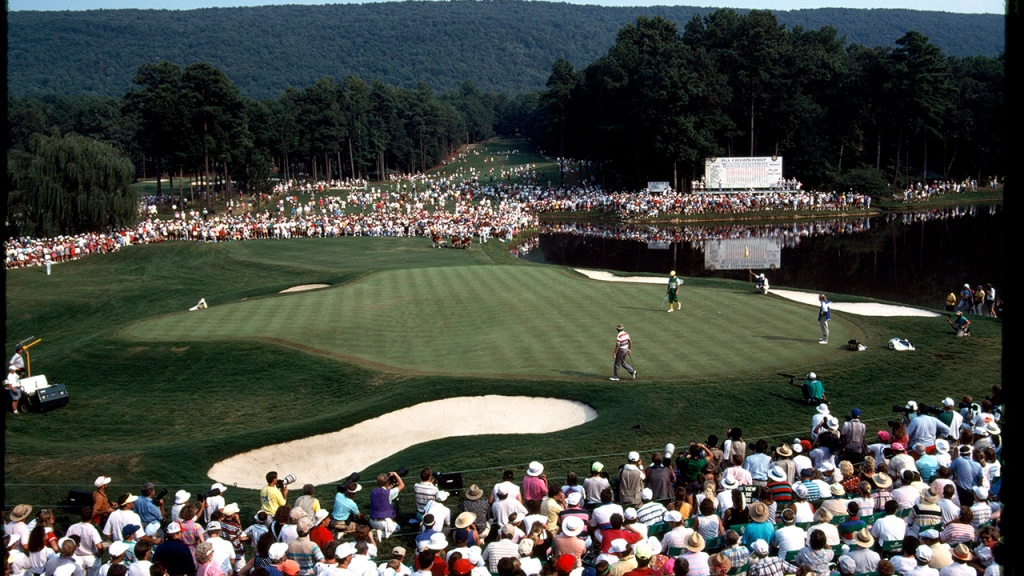 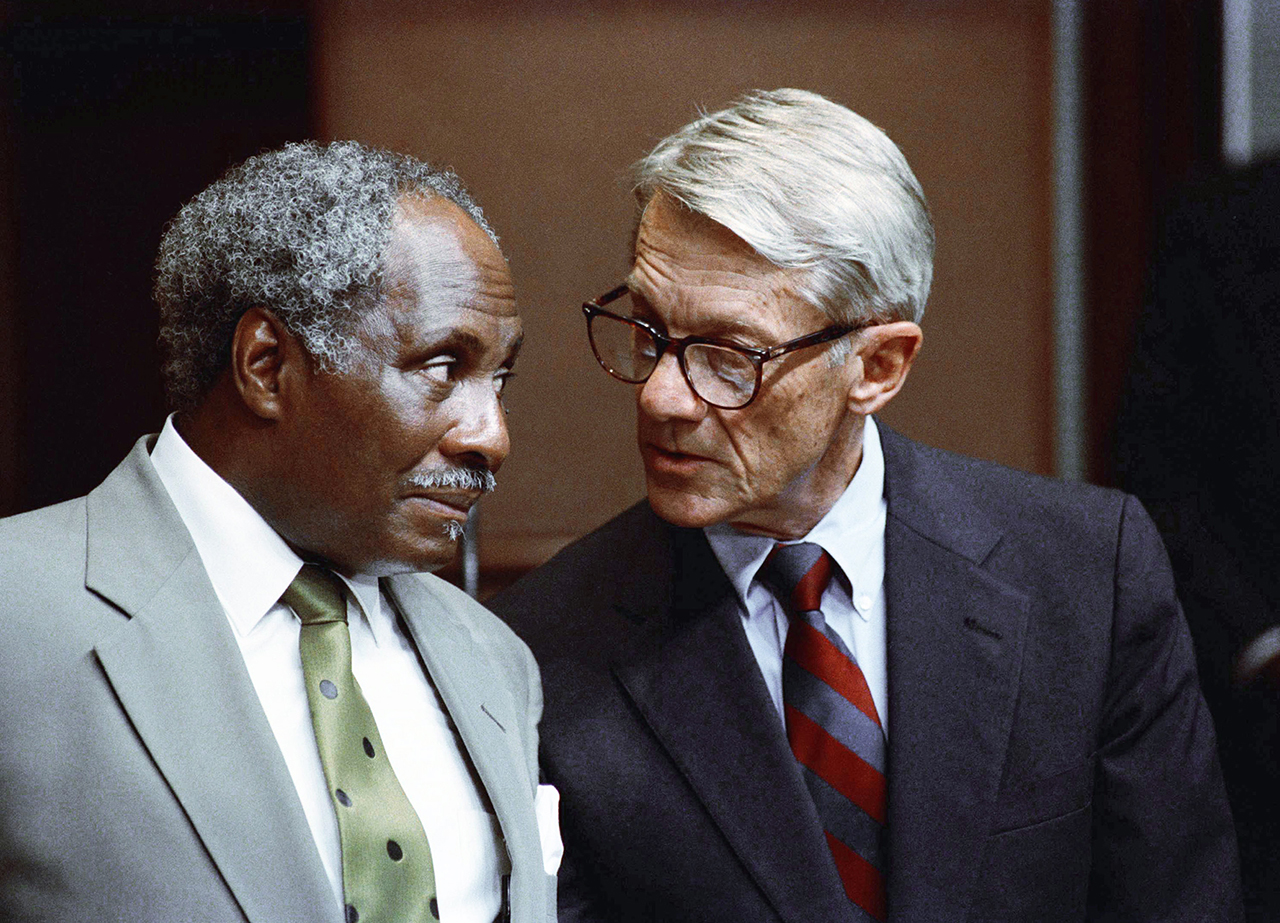 Hall Thompson had dreamed of building a golf course for at least 25 years. He took up golf as a Nashville teenager caddying for an older brother and kept the fever his entire life. Thompson served in the Air Force in the Pacific during World War II. In 1957, at age 34, he founded Thompson Tractor Co., which became one of the leading companies of its kind. When he was admitted to Augusta National Golf Club in 1974, his youngest daughter, Lisa, 11 at the time, shook her head.

“Well dad,” she said, “I guess this means we’re not going to build our golf course.”

That may have been the case if not for his tractor company hiring a consulting psychologist, who asked Thompson one day what unfulfilled ambition he had. He mentioned the golf course.

“He said, ‘Why don’t you do it?’ And he kept after me. He’d ask me every month,” Thompson told Southern Living magazine.

Finally, his wife, Lucy, said, “Dammit, Hall, why don’t you go ahead and build that golf course?”

Thompson did, purchasing 1,500 acres of land and hiring Jack Nicklaus to design the course with its red-brick Williamsburg Colonial clubhouse. As he put it, “We like to call Shoal Creek a Nicklaus-Thompson design.”

The course, cradled in the lap of Oak and Double Oak Mountains at the southern end of the Appalachians just 14 miles south of Birmingham, opened in 1977 and played host to the PGA Championship in 1984 and the U.S. Amateur Championship in 1986.

Thompson was a beloved local figure for his civic deeds, including annually sending half a dozen of the city’s top junior golfers to Augusta, Georgia, to watch a practice round at the Masters. In 1961 one of those guests was 14-year-old Hubert Green, who went on to win two majors during a Hall of Fame career and never forgot the gesture. The 1984 PGA Championship, won by Lee Trevino, was deemed the most financially successful PGA in history, which led to the association’s speedy return date in 1990. 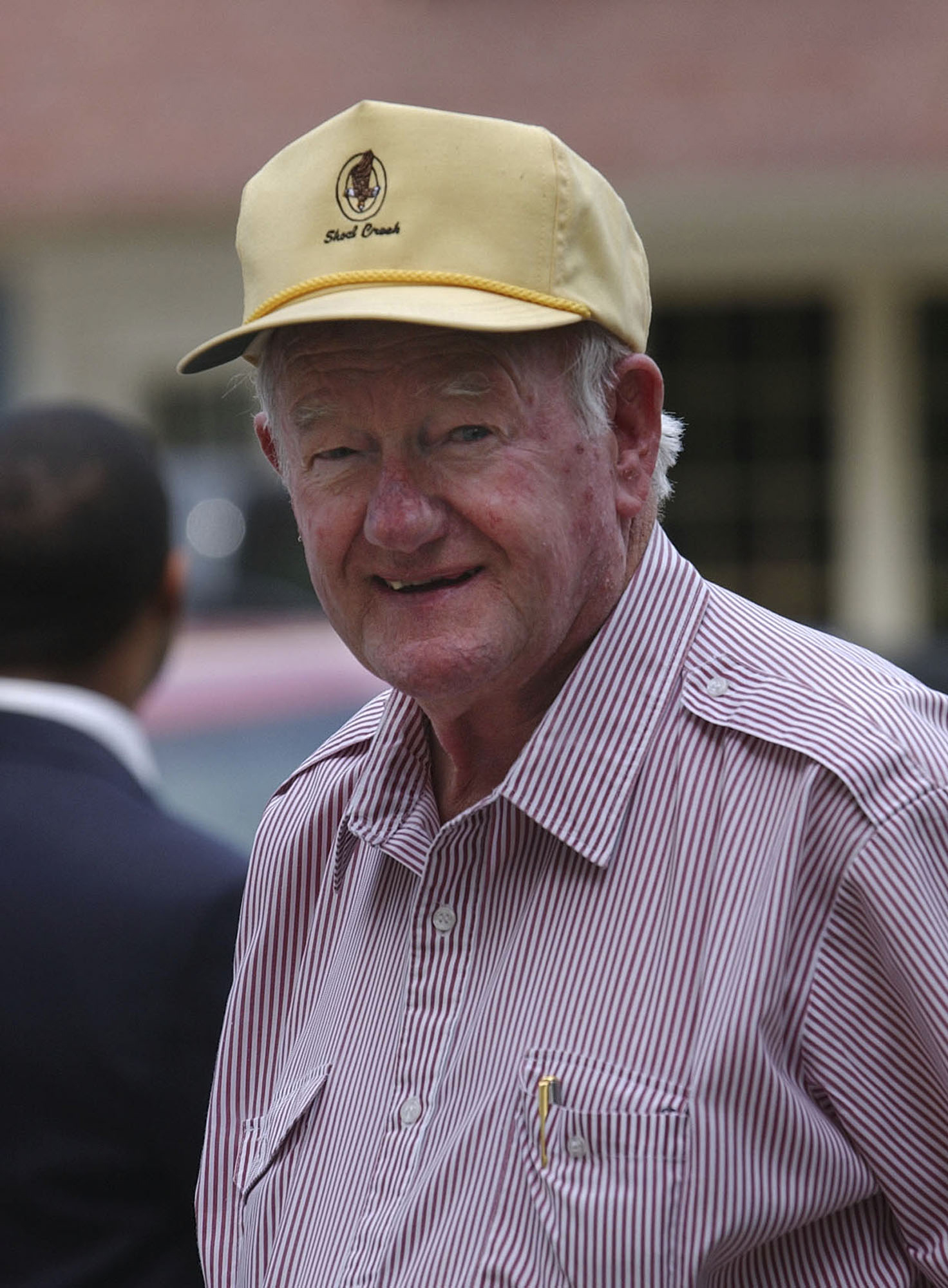 Hall Thompson went from beloved local social figure to being vilified nationally as a racist for his comments in the lead up to the 1990 PGA Championship.

In the lead-up, Thompson responded to a question from a reporter for the Birmingham Post-Herald, who asked him about the private club’s membership policy. “We don’t discriminate in every other area except Blacks,” he said, adding that he would not be told who would be a member of his club. He said the club had Italian members, Lebanese members, Jewish and female members. As for Blacks: “That’s just not done in Birmingham,” he was quoted as saying.

Thompson, who was vilified as a racist, insisted he was misquoted and apologized. However, the damage was done. IBM, Toyota and Anheuser-Busch were among the Fortune 100 companies that pulled more than $2 million in commercial advertising from ABC’s network broadcast, putting pressure on the club and the PGA of America to do something. PGA executive director Jim Awtrey, who would lose 15 pounds in a three-week period as he dealt with the biggest controversy of his career, recalled receiving a phone call alerting him early on that the PGA had a problem on its hands.

“It wasn’t a sports story,” Awtrey said. “It was a front-page story around the world.”

Birmingham was where in 1963 Commissioner of Public Safety Bull Connor tried to clear the streets with fire hoses and police dogs, making the city an international symbol of intolerance. Birmingham’s racial history made it uniquely suited to be the battleground for race in golf, or as Awtrey put it, “If you were going to pick the worst place in the world to have that happen, it was right there.”

In addition to a TV sponsor boycott, civil rights groups threatened to picket. No less than the Rev. Joseph Lowery threatened to bus people in from the Northeast, shut down the highways with protesters and march in front of the club’s entrance. 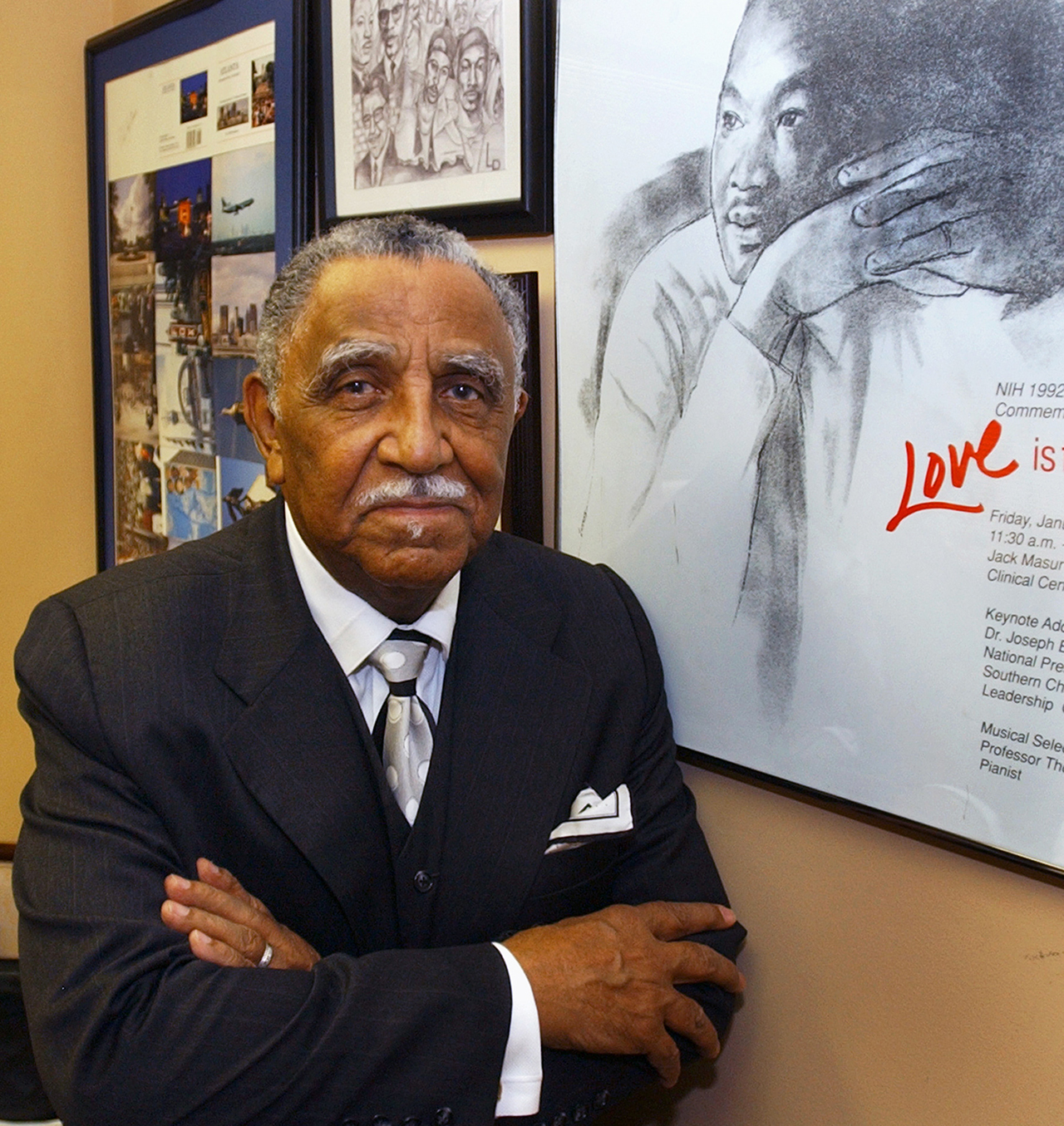 Rev. Joseph Lowery at his Atlanta office for the Georgia Coalition for the Peoples’ Agenda in 2004 (AP/Gregory Smith)

Lowery participated in most of the major activities of the civil rights movement in the 1950s and 1960s, including leading the Montgomery bus boycott in 1955 after the arrest of Rosa Parks. Lowery founded the Southern Christian Leadership Conference with the Rev. Martin Luther King Jr. and others, serving as its vice president, later chairman of the board and from 1977 to 1997 its president. He was dubbed the “Dean of the Civil Rights Movement.” Lowery, who died in 2020, swore Barack Obama into office as the 44th President of the United States and later received the Presidential Medal of Freedom from him.

The PGA pushed Thompson to admit a Black member, but just as Rielly had experienced with the restaurant owner in Pennsylvania nearly 40 years earlier, Thompson refused to budge. Rielly recalled that members of the PGA board were willing to allow Thompson to move forward with the PGA, but he held firm and insisted they arrange contingency plans to move the championship elsewhere.

“It would’ve been a disaster,” Beman said. “Pat recognized it was the right thing to do. He was the rock.”

No decision designed to promote societal change is ever unanimous. In the succeeding days, Awtrey phoned Jack Nicklaus, outlined the situation and asked if Muirfield Village Golf Club, the private facility in Ohio owned by Nicklaus, would step in and host the tournament. Nicklaus agreed to do so, but Thompson caught wind of it and within 30 minutes Nicklaus phoned back having undergone a change of heart, saying he couldn’t host the tournament, Awtrey said.

Rielly called Beman, who offered TPC Sawgrass as a backup. In a recent interview, Awtrey said that was news to him. “I’m not sure that’s ever been discussed. That was a personal conversation between Pat and I,” Beman said in a phone interview. “We were prepared to make it happen, and we could’ve done it.”

During this tumultuous time, the PGA also contacted a New York public relations firm to help with crisis management. Vickee Jordan, daughter of Vernon Jordan, a civil rights leader and business executive who would soon rise to prominence as one of Bill Clinton’s most trusted advisers during his presidency, was employed by Burson-Marsteller public relations firm as a communications training specialist. Her job was to put Rielly through his paces with potential questions he’d face from the media. Knowing that Rielly served as head professional at a private club that hadn’t admitted a Black member, Jordan’s job was to expose any vulnerability in Rielly. She grilled Rielly hard, and Awtrey never forgot the question that broke him.

“Mr. Rielly, have you ever heard of the Emancipation Proclamation?” she asked.

Rielly, who overcame a childhood stutter, stammered. He was clearly flummoxed.

“He was right on the edge of hyperventilating,” Awtrey remembered. “We stopped right there, and it was settled: I was chosen to handle the interviews with the press.”

But Rielly took the lead on pressing Thompson to see the importance of admitting a Black member immediately.

“Shoal Creek was easy for me,” Rielly said. “I knew what I was going to do. If they didn’t do what they did, we weren’t going to be there. The game is bigger than the PGA Championship. The game is everything.”

How close was the PGA to moving its championship? Very close. “Hall didn’t think we’d move it,” Rielly remembered. “He asked my secretary (Gary Schaal), ‘How serious is Pat Rielly?’ He answered, ‘Pat Rielly is as serious as cardiac arrest.’ There was dead silence.”

Nine days before the PGA Championship, the club agreed to extend an honorary membership to Louis J. Willie, a 66-year-old World War II veteran and Black businessman who headed the Booker T. Washington Insurance Company, Alabama’s largest Black-owned employer. Willie had barely played golf in the past 20 years, but that was of little concern. He and his wife received a standing ovation when they walked into the club for a dinner that week, and it diffused the situation with the SCLC.