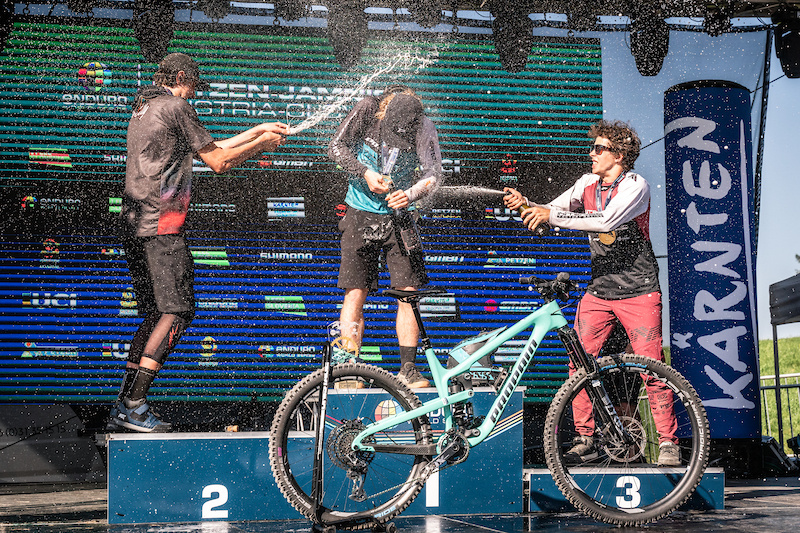 The Enduro World Series youngest team took on Round #2 of the EWS in Petzen-Jamnica. The young Canadian talent took centre stage with results that blew everyone away. The team consists of local Kamloops boy Johnathan Helly, Kelowna kid Emmett Hancock, Canmore dude Jack Menzies, and manager/racer Jacob Tooke from Vernon. Watch Episode 1 of “Growing Pains” to see what race week is like for a team that is growing from the ground up with racers who quite literally are still growing from the ground up. These kids are groms and we love it.

Jack started the race off with a great pro stage coming down to take 4th in elite. On the second day jack was looking to hold his position and fight for a good result. With A few minor mistakes coming into the last he was sitting 6th heading up for the long and physical stage to finish the day. After suffering a broken chain at the top of the run and a few crashes he came down to claim 11th on the day.
Emmett had a good weekend and took the race stage by stage trying to find his pace among the European dirt. With a good pro-stage result under his belt he built his confidence through stages 2,3 and 4 with a 2nd place result on stage 2. Stage 5 brought the foreseen challenge of arm pump, it hit him super hard causing 3 crashes and pushing him back 2 positions. The speed is there and he is stoked to refine the process for the next race.
Jacob continued to find the balance between managing the team and his own racing after coming back from injury. Jacob felt good on the long Petzen stages (stages 1 and 5) and had some learning experiences on the stages in Jamnica. Overall he was stoked to end things on a positive note and continue the momentum moving forward to the next round.
Johnny started the day off with some good stage results in Slovenia building on His Prostage result. On the last stage in Petzen he suffered a mechanical half way up and was forced to ride the rest of the stage chainless causing a few silly crashes. He somehow managed to get 3rd on the stage and maintain 2nd on the day.
Photos: Aedan Skinner