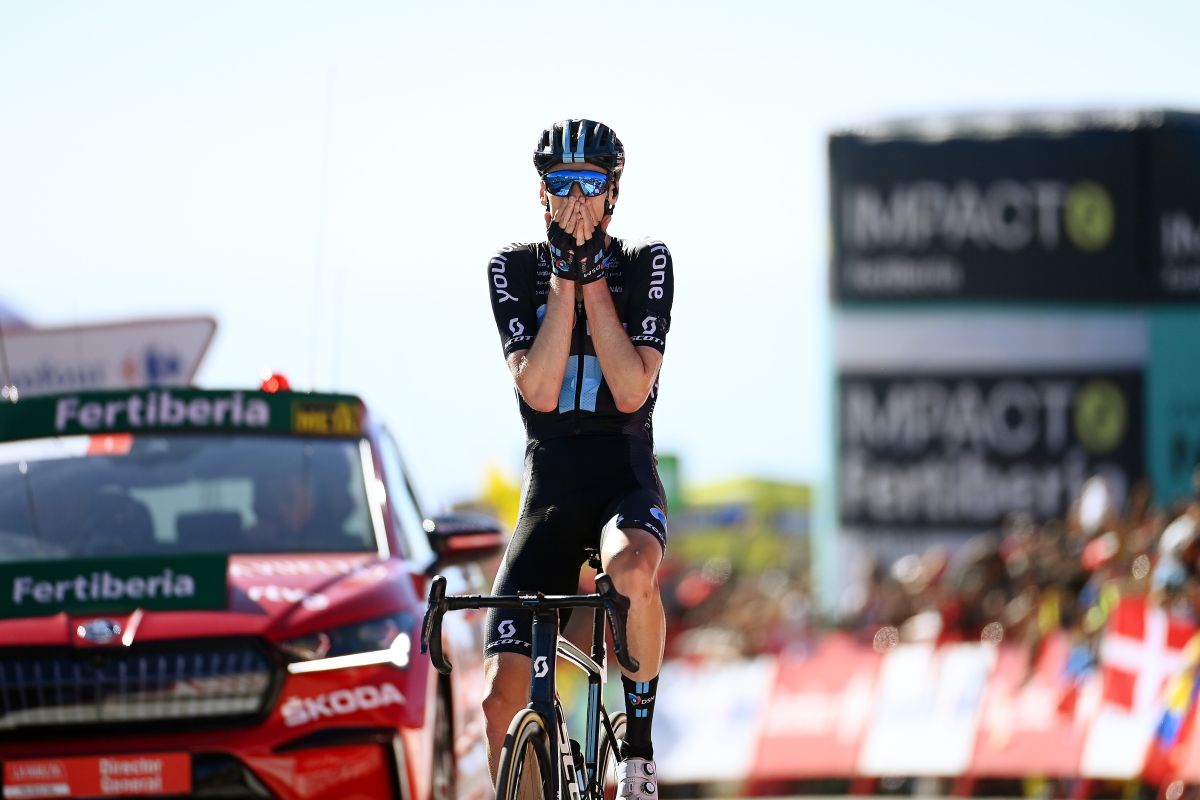 Thymen Arensman (Team DSM) recorded a brilliant solo win on Europe’s highest paved road as he held off the GC riders rampaging behind him.

It was the Dutchman’s second ever professional win, and first in a grand tour.

The Vuelta’s queen stage lived up to expectations as the day’s final climb- the monstrous Pico de Veleta- shook up the GC standings significantly.

Arensman’s efforts have launched him into 8th place on GC while Miguel Ángel López (Astana Qazaqstan) ends the day in 6th.

All the riders will welcome tomorrow’s rest day after 4000 metres of climbing and temperatures in the mid thirties made for a punishing day out in Andalusia.

The queen stage of the Vuelta finished atop the fearsome Pico de Veleta in the Sierra Nevada mountains, which at 2512 meters is the highest finish in all three grand tours.

Miguel Ángel López (Astana Qazaqstan) won here in 2017 but in sixth place on GC it would be difficult for him to get in the break. The main question was how race-leader Remco Evenepoel would fare at high altitude particularly after losing time to second-placed Primož Roglič on yesterday’s stage.

The stage started with a flurry of attacks as Hugh Carthy (EF Education–EasyPost) and Rohan Dennis (Jumbo Visma) went in search of a stage win.

Meanwhile in the peloton a touch of wheels happened leaving eighth-placed Wilco Kelderman (Bora-Hansgrohe) on the floor gingerly feeling his collarbone before getting back on.

The breathless start continued as Mark Donovan (DSM) lost his front wheel on a roundabout. A strung-out peloton rode hard not letting the break’s advantage extend to more than fifteen seconds.

Richard Carapaz (Ineos Grenadiers) was next to attack the peloton vying for a third stage win of the race. Carapaz and Jai Hindley (Bora-Hansgrohe) rode in no man’s land for a while until they were joined by another 26 riders forming a large breakaway.

The high-powered break built a lead of over five minutes as the riders charged towards Granada and the comparatively small Alto del Purche (1490m).

In the peloton Quick Step Alpha-Vinyl and Movistar led the chase through the stunning Andalusian countryside.

Lawson Craddock (BikeExchange–Jayco) attacked the break who were content to let him gain over a minute. The gap had gone out to 6’30 and it looked like the winner might come from the break.

Craddock hit the Alto del Purche with 1’30 on the break, but behind them Jumbo Visma and AG2R began pulling and eating away at both time gaps.

Jay Vine attacked the main break in search of mountain points and just pipped Lawson Craddock to the summit, 4’13 ahead of the peloton.

But the pair were reeled back in by the remnants of the main break on the lower slopes of the mighty Pico de Veleta. Meanwhile in the peloton Primož Roglič had a mechanical and endured a stressful few minutes back in the team cars.

Marc Soler attacked 22km out from the summit while the break began shedding riders. Would they make it to the finish before the GC fireworks pulled the peloton back into contention?

It didn’t look likely as Jumbo Visma decimated the peloton and piled the pressure on Remco Evenepoel who responded well sitting comfortably on the wheels.

Soon both Roglič and Evenepoel were isolated as the peloton was whittled down to just nine riders. Big names like Carapaz, João Almeida (UAE Team Emirates), Mikel Landa (Bahrain Victorius) and Carlos Rodríguez (Ineos Grenadiers) were all dropped with over 18km to the top.

Up front, Soler extended his gap to the break despite Thymen Arensman’s best efforts. In the peloton, Evenepoel put in a little dig and it looked like Roglič was on the ropes.

Evenepoel was bolstered by the presence of compatriot and teammate Louis Vervaeke who dropped back from the break to help his leader. But then the GC fireworks began.

Carapaz, who was dropped early, put in a heroic ride to pull João Almeida, Carlos Rodríguez and Juan Ayuso (UAE Team Emirates) within touching distance of the maillot rojo.

In the main break Thymen Arensman attacked, caught and dropped Soler who was blowing up. The dutchman had 1’20 to Enric Mas and 1’40 to the Evenepoel/Roglič/O’Connor group 7km out.

Evenepoel was content to let Mas and López go as he prepared for a final showdown with Roglič.

At 2400 metres above sea level, Arensman looked set to take the biggest win of his career to date as he took a 1’20 lead under the 1km banner.

Finally Roglič attacked Evenepoel and gapped the Belgian but quickly ran out of road.

Arensman took the win and started the GC clock. Enric Mas took second 1’23 down to move up on GC. Then came Roglič and O’Connor, followed by Evenepoel 15 seconds later.