Brandon Thomas-Asante celebrated his West Brom debut with a 98th-minute equaliser to earn the Baggies a 1-1 draw with Burnley at The Hawthorns.

Thomas-Asante had barely touched the ball since being introduced as a 70th-minute substitute as West Brom looked to rescue a point, but found himself in the right place at the right time to bundle home from six yards after John Swift’s cross was not cleared.

Jay Rodriguez had earlier slotted Burnley ahead from the penalty spot after Arijanet Muric’s superb goal-kick picked out Nathan Tella, and David Button brought him down in the West Brom box.

The Baggies have still won only one of their opening eight games but were well worth a point in a game where they twice hit the woodwork and saw a number of other chances go begging.

Kyle Bartley’s header from an early corner kissed Muric’s bar on its way over, before the goalkeeper’s glancing touch turned Jed Wallace’s goalbound effort onto the post before half-time.

Despite continuing to create after the break, it was Burnley who looked the most likely to score in the second period when Conor Townsend’s weak header was intercepted by Darko Churlinov, who raced through on goal before hammering another effort against the woodwork.

That all changed deep into added time when Swift’s cross fell kindly for Thomas-Asante, two days after his arrival from Salford, to get his West Brom career off to the perfect start with an instinctive effort to earn the hosts a share of the spoils, and deny Burnley the chance to claim top spot.

“Credit to West Brom who were better than us,” Burnley manager Vincent Kompany told Sky Sports. “I have no issue with our effort and how we defended the box and crosses, but everything was as a result of us just not being good on the ball today.”

How Baggies boinged to deserved point

West Brom flew out of the traps against their pace-setting visitors, looking to avoid conceding the first goal for a fifth time this season.

They came closest when Bartley nodded against the bar from a corner, having probed without causing Muric real problems until that point.

Immediately after that close call, Burnley found a breakthrough with their first real chance. The goalkeeper’s pinpoint long goal-kick sent Tella in behind the home defence, and his quick feet proved too fast for Button, whose clumsy challenge brought him down in the area.

Rodriguez, who had failed to score in 10 previous appearances against his former side, finally put that record to bed from 12 yards by sending the goalkeeper the wrong way, but there was only a muted celebration on the ground he called home for two years.

The Baggies should have been level by the break but the width of the post denied them an equaliser before half-time, when Muric’s vital deflection turned Wallace’s shot onto the woodwork.

They did not return for the second period with the same panache and instead were indebted to substitute Churlinov’s poor finishing for remaining in the game. The substitute, who had already missed one opportunity, latched onto Townsend’s blind back pass but, with only Button to beat, he left the base of the near post shaking with a wayward effort.

West Brom threw the kitchen sink at their visitors in the final stages with defenders sacrificed for Thomas-Asante and Matt Phillips, and it finally bore fruit deep into added time as the £500,000 August 31 arrival turned home from close range after a poor clearance from Swift’s cross.

Man of the match – Jay Rodriguez

Aside from scoring his side’s only goal, Rodriguez had more shots and touches in the opposition box (three each) than any other Burnley player and worked hard without the ball too, winning it back four times, including making three tackles.

What the managers said… 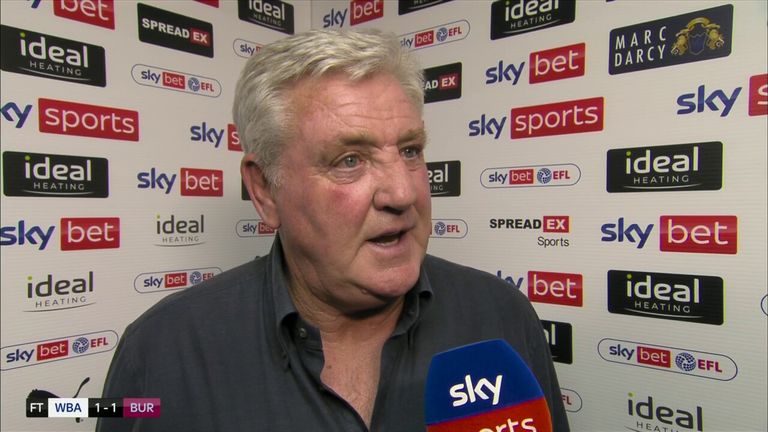 West Brom manager Steve Bruce: “I think all of us at the ground the other day found it quite refreshing when he [Thomas-Asante] was in there with his mum and dad.

“Obviously it’s the proudest moment of his young life to come through where he’s come through and get a chance. It’s a bit like Roy of the Rovers stuff, I’m delighted for him. It’s a wonderful story, and I suppose he’ll make all the headlines.

“We needed something, we deserved something. We’ve been like that all season. It becomes a bit frustrating, of course we’ve given another bad goal away, it’s an awful goal to give away – not the penalty, but the way it gets there. Straight from the goal-kick down the middle, and we have to make sure we’re better than that.

“But overall we’ve shown enough courage, spirit and endeavour through the team, and a big well done to the supporters too. They got behind us right until the end.” 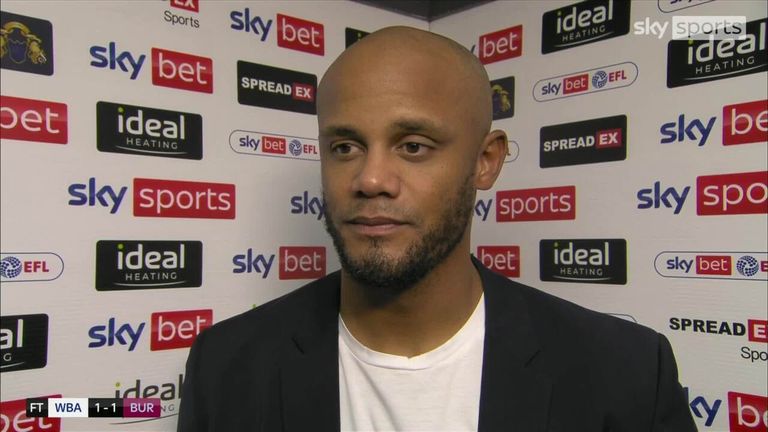 Burnley manager Vincent Kompany: “First of all, credit to West Brom who were better than us. I have no issue with our effort and how we defended the box and crosses, but everything was as a result of us just not being good on the ball today.

“It looked like a bit of fatigue in the team, at times simple passes were getting away from us. Then you have to restart everything again – your press, squeezing again, working again.

“In the end it took a little bit out of us, and having to play almost 100 minutes at the end of such a tough schedule got the better of us.

“If we were on a good day, we could’ve had a lot more chances, it was there for us to take the game but we were very wasteful. It was a very contrasting image from what we’re used to, but you’re going to get these moments. It’s a good point away from home against a team with a lot of good players. We’ve got to move on.”

West Brom take the short trip across the Midlands to Coventry on Saturday, September 10; kick-off at 3pm. Burnley are back on Sky Sports Football next Friday night, when they host Norwich at Turf Moor; kick-off at 8pm.