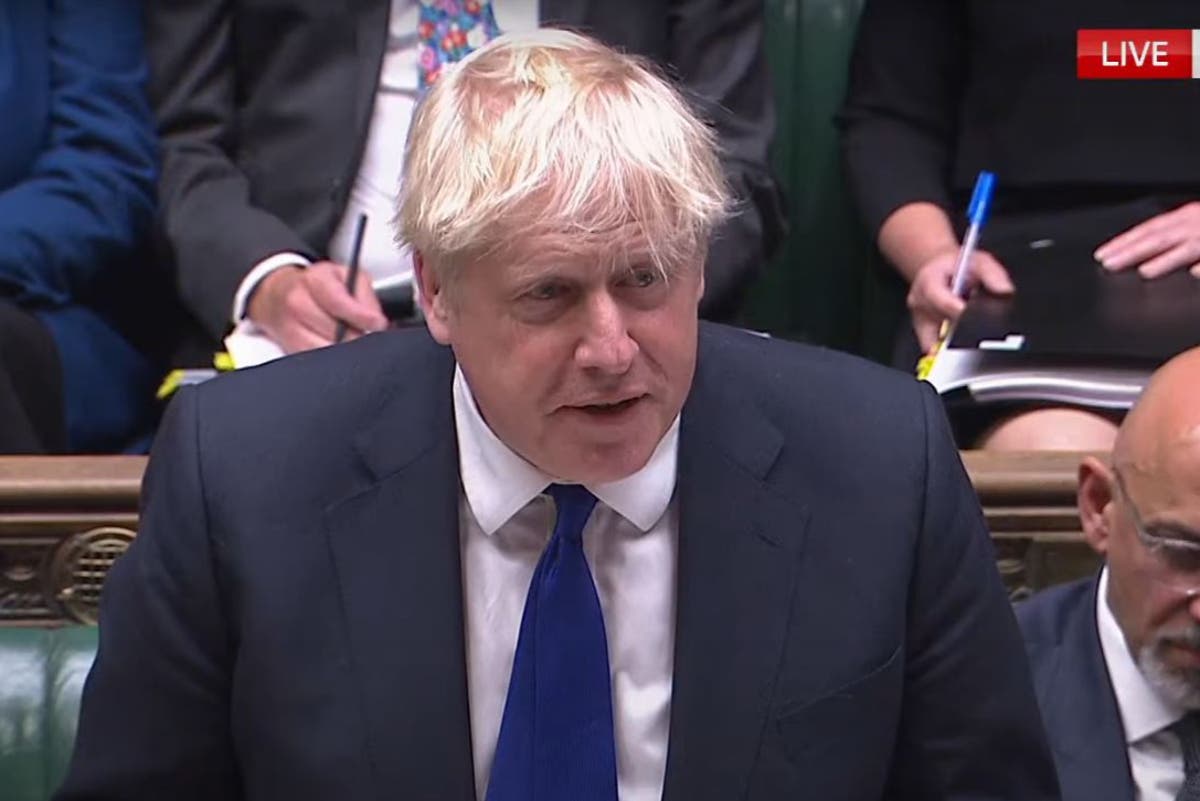 oris Johnson is being grilled at PMQs on Wednesday afternoon as his premiership hangs in the balance following multiple resignations.

The Prime Minister faces a battle to stay in power after a string of senior and junior ministers stepped down, saying they could no longer serve in his Government after the Chris Pincher scandal.

Junior education minister Will Quince, who just two days ago had been sent out to defend Mr Johnson, said he had handed his resignation to the Prime Minister. He was swiftly followed by Laura Trott, who quit as PPS to the Department for Transport, and Schools minister Robin Walker.

A string of further resignations were announced just after 11am, with economic secretary to the Treasury John Glen announcing he would step down. Felicity Buchan, a parliamentary private secretary to business minister Kwasi Kwarteng, said she would be leaving the post.

It follows Rishi Sunak quitting as Chancellor, alongside Sajid Javid who resigned as Health Secretary, after Mr Johnson was forced into a humiliating apology to address the row over deputy chief whip Mr Pincher.

Starmer: Promoted ministers are ‘charge of the lightweight brigade

Sir Keir Starmer labels the PM’s comments in PMQs “a pathetic spectacle” after he mentions Durham Police’s investigation into beergate.

“The dying act of his political career is to parrot that nonsense,” he says.

Sir Keir says that the ministers promoted in the Cabinet are the “charge of the lightweight brigade”, causing the Labour benches to erupt.

”Have some self-respect. For a week he’s had them defending his decision promoting a sexual predator,” he adds.

He says the country “desreves better” than a “Z-list cast of nodding dogs” during a crisis.

Anyone defending PM ‘hasn’t got a shred of integrity’, says Starmer

Sir Keir says the PM “has ignored” the “awful behaviour” of some of his MPs.

He mentions the alleged of Home Office staff by Priti Patel and his Downing Street staff during the partygate scandal.

“Anyone defending that now hasn’t got a shred of integrity,” he adds.

“Isn’t this the first case of the sinking ship fleeing the rats?”

Mr Johnson responds: “He should hear what his lot say about him.

“He wanted to install Jeremy Corbyn into No10.”

Jo Churchill, who was appointed as Parliamentary Under Secretary of State at the Department for Environment, Food & Rural Affairs, has resigned from the Government.

Sir Keir mentions that a Government whip asked one of the complainants against Chris Pincher whether he was gay.

“When he said he was, she replied: ‘That doesn’t make it straightforward.’

“That comment will sicken anyone whose experienced sexual assault and worry that prejudice means they wont be taken seriously.”

Sir Keir Starmer details the Chris Pincher scandal to the Commons, before asking: “He knew this man was accused of predatory behaviour but he promoted them, why?

The PM says: “He no longer has the Conservative whip. He is now the subject of an independent investigation.

“I abhor bullying and abuse of power anywhere in parliament.”

Sir Keir responds: “None of that explains why he promoted him in the first place.”

Boris Johnson steps up to the despatch box to raucous laughter from the opposite benches.

“Today is a big day as we implement the biggest tax cut in a decade,” he says.

He wishes the best of luck to the Lionesses as they compete in the Euro tournament.

Prime Minister’s Questions is coming up shortly, with Boris Johnson perhaps facing his toughest test yet in the Commons.

ITV’s Paul Brand has noted that the Tory benches are “virtually deserted” in what is usually a packed event.

Justice Minister Victoria Atkins has resigned from the Government.

She said the challenges facing the country “demand resolute focus” which the PM “cannot provide” at present.

Tom Hunt, Tory MP for Ipswich, said he has submitted a letter of no confidence in Boris Johnson.

He said that the past nine months had been a “rough ride” following numerous scandals in Downing Street.

But he said the events of the last week relating to Chris Pincher were the “straw that has broken the camel’s back”.

“I foresee things descending to new depths and I do not think that under the Prime Minister’s leadership it will be possible to unite the Conservative Parliamentary Party and give us the best chance possible of winning the next General Election,” he added.

In her letter of resignation, Kensington MP Felicity Buchan said: “It is with great sadness that I tender my resignation as Parliamentary Private Secretary in the Department of Business, Energy and Industrial Strategy.

“It has been a huge honour to have served in this department at a time when energy security and the transition to net zero are so critical.

“However, I am afraid that you have lost the confidence of my constituents and me. The current situation is untenable.

“I believe passionately in Conservative values and want to ensure that we are implementing Conservative policies without distractions. That requires fresh leadership and it requires a new vision for the country. That vision must be a country of low taxes and high growth; we must be the party of aspiration.

“I will continue to devote my efforts to serving the people of Kensington.”