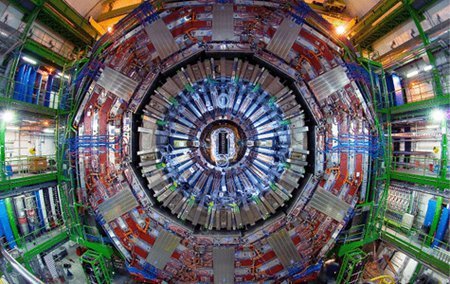 Ten years ago this week, two international collaborations of groups of scientists, including a large contingent from Caltech, confirmed that they had found conclusive evidence for the Higgs boson, an elusive elementary particle, first predicted in a series of articles published in the mid-1960s, that is thought to endow elementary particles with mass.

Fifty years prior, as theoretical physicists endeavored to understand the so-called electroweak theory, which describes both electromagnetism and the weak nuclear force (involved in radioactive decay), it became apparent to Peter Higgs, working in the UK, and independently to François Englert and Robert Brout, in Belgium, as well as U.S. physicist Gerald Guralnik and others, that a previously unidentified field that filled the universe was required to explain the behavior of the elementary particles that compose matter. This field, the Higgs field, would lead to a particle with zero spin, significant mass, and have the ability to spontaneously break the symmetry of the earliest universe, allowing the universe to materialize. That particle became known as the Higgs boson.

Over the decades that followed, experimental physicists first devised and then developed the instruments and methods required to detect the Higgs boson. The most ambitious of these projects was the Large Hadron Collider (LHC), which is operated by the European Organization for Nuclear Research, or CERN. Since the planning of the LHC in the late 1980s, the U.S. Department of Energy and the National Science Foundation have worked in collaboration with CERN to provide funding and technology know-how, and to support thousands of scientists helping to search for the Higgs.

The LHC is a 27-kilometer-long underground ring through which protons are accelerated by superconducting magnets to just under the speed of light. Two beams of protons traveling in opposite directions are focused and directed to collide with each other at specific points where detectors can observe the particles produced by these collisions. The use of major detector facilities with different designs—chiefly the Compact Muon Solenoid (CMS) and the A Toroidal LHC ApparatuS (ATLAS)—enables scientists to conduct a wide variety of experiments to test the predictions of the Standard Model of which the Higgs boson is a part, to search for new particles and interactions that lie beyond the standard model, and to verify each other’s results. The detection of the Higgs boson, announced on July 4, 2012, was based on the analysis of an unprecedented amount of data collected by CMS and ATLAS.

Harvey Newman, the Marvin L. Goldberger Professor of Physics at Caltech and one of the leaders of the Caltech team, which is part of the CMS collaboration, calls the discovery of the Higgs boson “a milestone in human history” that “has permanently changed the way we view the universe.”

Humorously called the “God particle” in 1993 in a book of the same name by authors Leon Lederman and Dick Teresi, the Higgs boson plays a crucial role in the Standard Model of physics: it provides the mechanism through which elementary particles acquire mass. As particles traverse the Higgs field and interact with Higgs bosons, some glide over the surface, not changing at all. But others are caught in the weeds, so to speak, and gain mass.

The Standard Model has yet to explain dark matter or gravitation adequately, but time after time its predictions have been confirmed experimentally. “It is a striking, and surprising result that through the analysis of increasing amounts of data, with increasingly sensitive methods, the agreement with the Standard Model has continued to improve in all its details, even as the first signs of what lies beyond, in terms of new particles and new interactions, has continued to elude us,” Newman says.

Any deviation from results predicted by the Standard Model suggests the presence of other particles or dynamics that may one day provide the groundwork for a new, more all-encompassing model of physics.

Collisions that produce Higgs bosons are very infrequent. For every billion proton–proton collisions, only one Higgs boson is created. To further complicate this picture, Higgs bosons decay very quickly into other particles, and it is only by measuring the characteristics of these particles that the prior existence of the Higgs boson can be inferred. Caltech’s Maria Spiropulu, the Shang-Yi Ch’en Professor of Physics and the other leader of the original team of Caltech researchers who helped to detect the Higgs, describes it as the “proverbial needle in the haystack problem.”

Technological improvements to the LHC and its detectors have enabled higher energy and greater precision in the colliders and their detectors. Since the discovery of the Higgs boson in 2012, experiments at the LHC have revealed further information about the Higgs boson and its mass and decay processes. For example, in 2018, Newman, Spiropulu, and other Caltech researchers worked with an international team that produced evidence showing the Higgs boson decaying into pairs of fundamental particles called bottom quarks, work that Spiropulu described at the time as a “Herculean labor.” Prior to that discovery, the CMS team made the first observation of the Higgs boson directly coupling to the heaviest standard model particle, the top quark.

In 2020, Spiropulu and her colleagues documented a rare decay process for the Higgs boson that results in two muons. “Probing the properties of the Higgs boson is tantamount to searching for new physics that we know has to be there,” said Spiropulu.

“I was just graduating from high school when I heard about the Higgs discovery at the LHC,” says Caltech graduate student and CMS team member Irene Dutta (MS ’20), who worked on the muon research. “It is humbling to know how well the Standard Model can describe elementary particles and their interactions to such precision.”

Most recently, a Caltech-led team of researchers working on the CMS experiment have used machine-learning algorithms based on neural networks to develop a new method to hunt for what may be an even more elusive prey than the Higgs itself: an exceedingly rare “pair” of interacting Higgs bosons that, according to theory, could be produced during proton collisions.

After a three-year shutdown to further upgrade the LHC accelerator and experiments, the LHC began final preparations for a third run (Run 3) early in 2022. The start of Run 3, scheduled to continue to the end of 2025, will take place on July 5, producing the first collisions at the new energy of 13.6 tera-electron-volts.

“The Higgs discovery is a milestone on a long road ahead,” says Caltech’s Barry Barish, Ronald and Maxine Linde Professor of Physics, Emeritus, the former leader of Caltech’s high-energy physics group (and co-winner of the Nobel Prize in Physics in 2017 for his work on another large-scale physics project, the Laser Interferometer Gravitational-wave Observatory, or LIGO, which made the first detection of the ripples in space and time known as gravitational waves in 2016). “Particle physics is moving onward keeping in mind that the Standard Model describes only a tiny fraction of what we know is there and more questions are unanswered than answered; yes, we do have a great simple parametrization in the Standard Model, but the actual origin of the electroweak symmetry breaking is unknown. We have a lot more work ahead,” says Barish.

Reflecting on a decade of exploring the Higgs boson, Newman notes that the research “continues to motivate us to think harder and design upgraded detectors and accelerator improvements enabling us to vastly expand our reach now and for the next two decades.” This includes the second major phase of the LHC program, known as the High Luminosity LHC, scheduled to run from 2029 to 2040. It will provide substantial upgrades of the accelerator complex and detectors that will lead to a projected increase in the collected data by a factor of 20 relative to what CMS and ATLAS have today.

The Caltech team also includes Si Xie, research assistant professor of physics, as well as research scientists Adi Bornheim and Ren-Yuan Zhu, all of whom have dedicated decades of study to discover and understand the Higgs boson. The Caltech group is leading novel ultraprecision-timing detector upgrades for the High Luminosity LHC and developing novel AI-based data-analysis approaches that will allow for accelerated near-real-time discovery. The group has produced more than a dozen Ph.D. theses and enabled approximately 100 undergraduate students and interns to engage in analysis, instrumentation, and computation research since the discovery of the Higgs.

Provided by
California Institute of Technology

This document is subject to copyright. Apart from any fair dealing for the purpose of private study or research, no
part may be reproduced without the written permission. The content is provided for information purposes only.