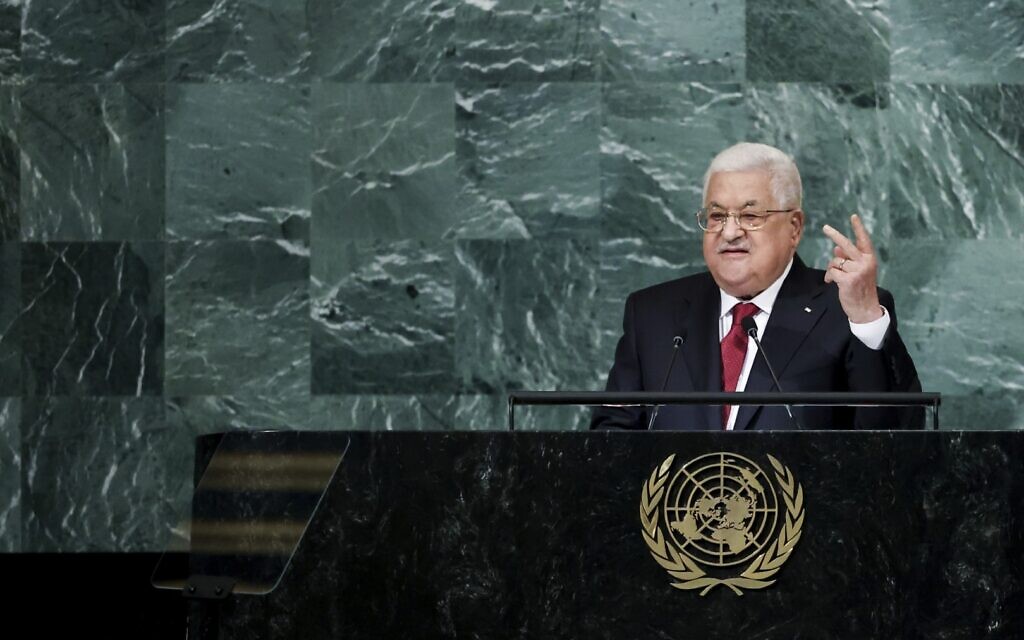 NEW YORK — In his UN speech Friday, Palestinian Authority President Mahmoud Abbas noted the “positive development” of Prime Minister Yair Lapid voicing support for a two-state solution during his address the previous day. But he spent the bulk of his own remarks repeating grievances against Israel’s government and security forces for their treatment of the Palestinians as well as the international community for failing to “protect” his people.

“But the real test to the seriousness and credibility to this stance… is for the Israeli government to go back to the negotiation table immediately,” the PA president said, adding that Israel must cease all unilateral actions such as settlement building, demolition of homes, evictions and “killings.”

Israel “is, through its premeditated and deliberate policies, destroying the two-state solution,” he told the General Assembly.

“This proves unequivocally that Israel does not believe in peace,” he added. “Therefore, we no longer have an Israeli partner to whom we can talk.”

Expressing a readiness to revive negotiations, he urged Israel: “You should at least temporarily stop [unilateral measures]… and if [the negotiations] fail then you can go back to whatever you want to do,” he said.

Much of the speech focused on lambasting Israel for a host of alleged crimes he said it had committed during and since the establishment of the Jewish state, accusing it of operating an “apartheid” regime against the Palestinians.

Abbas, 87, said Israel has been engaged in a campaign of land confiscation and was giving the military “total freedom” to kill or otherwise use excessive force against Palestinians.

“This is the truth: they are an apartheid regime,” he said. 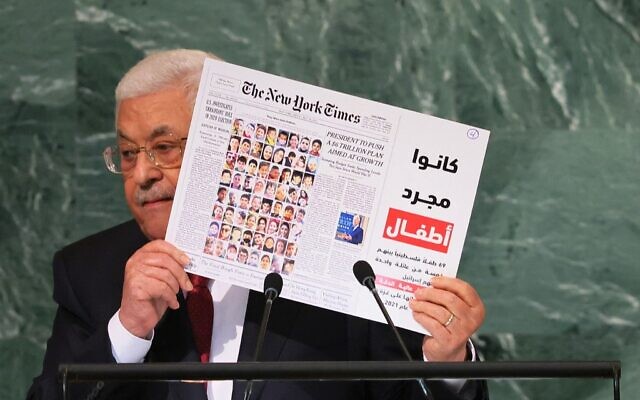 “Israel has committed 50 massacres since 1948 and until today,” he said. He said the most recent of those “massacres” took place in Gaza during the May 2021 war that Israel fought against Hamas. Abbas held up the front page of The New York Times, which included photos of the 67 children killed during the war. Israel protested the article at the time, saying that Hamas had been responsible for many of those deaths.

Echoing an accusation made on the same stage this week by Jordan’s King Abdullah, Abbas accused Israel of “targeting” Christian and Muslim holy sites in Jerusalem. Israel dismisses the claim, saying the only religion that doesn’t enjoy full freedom of worship in Jerusalem is Judaism, given that the status-quo that governs conduct on the Temple Mount bars Jews from praying there. Critics retort that Israel has allowed the status quo to be eroded at the flashpoint site and has been seeking to confiscate church-owned lands in the holy city.

Abbas held up photos of Israeli police attacking pallbearers and mourners during the funeral procession of slain Al Jazeera journalist Shireen Abu Akleh. Abbas again maintained that she was “deliberately” killed by an Israeli sniper and lamented the Biden administration’s refusal to prosecute those responsible even though she was an American citizen. The US and Israel maintain that Abu Akleh was likely killed by accident by an Israeli soldier during a firefight sparked by an IDF raid in the Palestinian city of Jenin. 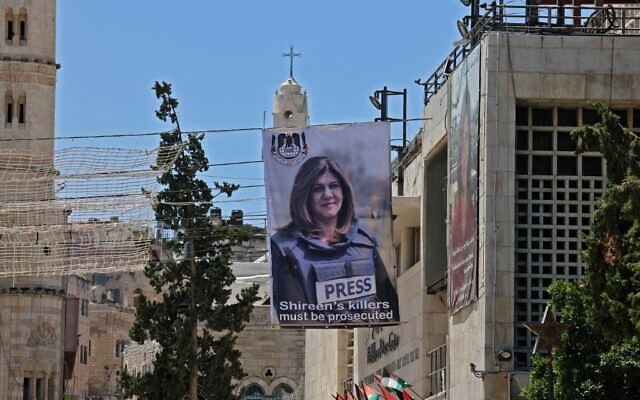 Banners depicting slain Palestinian-American journalist Shireen Abu Akleh hang on a building overlooking the Church of the Nativity in Bethlehem in the West Bank, on July 14, 2022. (Ahmad Gharabli/AFP)

He accused Israel of “imposing falsified curricula” on Palestinian schools in East Jerusalem, weighing in a recent conflict that has embroiled the capital.

The PA president also highlighted Israel’s practice of forcing those who built their homes illegally to decide between demolishing it themselves or have Israeli authorities carry out the razing and then bill the inhabitants for it. Palestinians say they’re forced to build illegally in East Jerusalem and parts of the West Bank because Israel rarely authorizes building permits for them.

Abbas has seen his popularity plummet over his continued cooperation with Israel and his refusal to hold elections for over 15 years. He again insisted on Friday that he’s prepared to hold a vote immediately but cannot do so because Israel refuses to allow Palestinians in East Jerusalem to participate. Analysts have maintained though that the decision has more to do with fears of significant gains by the Hamas terror group at the expense of his Fatah movement.

The PA president pointed to his objection to votes by the Palestinian Liberation Organization’s council in 2015 to suspend the recognition of Israel and end security coordination with the IDF, which Israel and the US credit for maintaining stability in the West Bank.

Abbas said that he has tried to stall the implementation of those resolutions in hopes that there would be a breakthrough in diplomatic negotiations with Israel. “We told them to wait for a while and be patient [because] maybe they’ll change their stance,” he recalled. 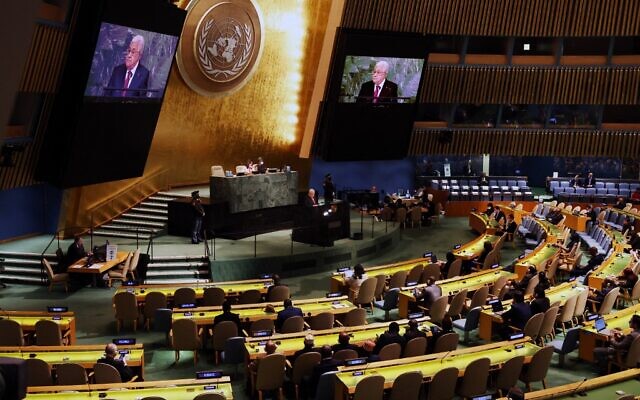 Palestinian Authority President Mahmoud Abbas holds up a graphic as he addresses the 77th session of the United Nations General Assembly at UN headquarters in New York on September 23, 2022 (Spencer Platt/Getty Images/AFP)

The PA leader did not go as far as to explicitly state that he would suspend the recognition of Israel as he has threatened to do in the past. However, he indicated that he would not be able to hold off critics for much longer and called on the international community to act.

Several times throughout the 47-minute remarks, Abbas implored the international community to back his initiative for the Palestinian UN mission to receive full-member status at the UN. Since 2012, it has held observer status, which has allowed it to join international bodies, but which in most regards is largely symbolic.

The Biden administration has warned the PA not to advance the initiative, indicating that it would use its veto in the Security Council in order to prevent a vote in the General Assembly.

Abbas suggested that the US position was unlikely to change, leaving him with few other options. However, he continued to object to the stance, saying that Washington’s support for a two-state solution was only in words and not in action. The US “pretend[s] to uphold international law and human rights,” he said, later saying the US and the UK were complicit in the Nakba — the Arabic word for catastrophe used by Palestinians to describe Israel’s establishment.

This will likely spark the ire of the Biden administration, given longheld congressional legislation requiring the US to pull funding from UN bodies that accept membership from the Palestinians before there is a resolution to the Israeli-Palestinian conflict. 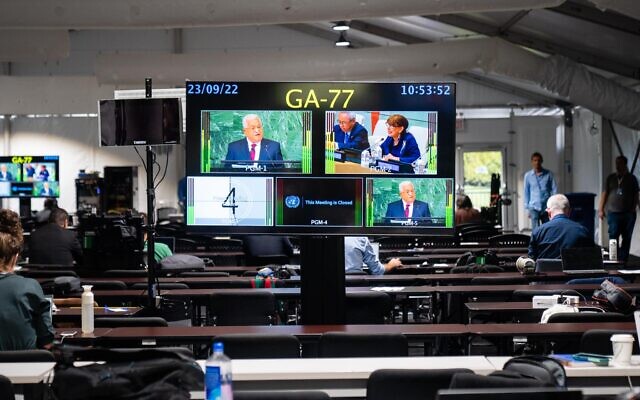 “They are living martyrs… and we will not leave them until they attain their freedom,” Abbas said.

He did not specifically comment on the stipends the PA grants prisoners and their families, which Israel and the US castigate as incentives for terror.

Abbas has for years told US officials privately that he is prepared to reform the policy branded by critics as “pay-to-slay.” However, no steps have been announced to that effect, likely given the heavily unpopular nature of such a move.

Lapid’s decision to give backing-in-principle to Palestinian statehood on the world stage marked a sharp shift from addresses in the previous five years from former prime minister Benjamin Netanyahu, who largely used the pulpit to speak out against Iran and what he said was Palestinian rejection of Israeli peace efforts. In 2016, Netanyahu told the UN plenum he was committed to a two-state vision, but he later disavowed the comments. 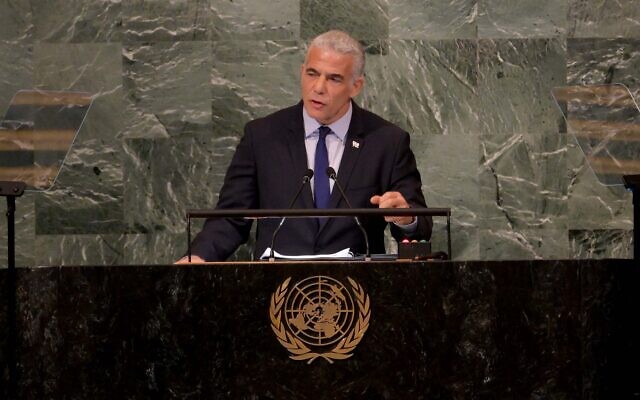 Lapid said Israel had only a single condition to Palestinian statehood: “That a future Palestinian state will be a peaceful one. That it will not become another terror base from which to threaten the well-being and the very existence of Israel. That we will have the ability to protect the security of all the citizens of Israel, at all times.”

“You can ask us to live according to the values in the UN Charter,” he said, “but you cannot ask us to die for them.”

Lapid’s call for a two-state solution in his speech has drawn condemnation from the right flank of his governing coalition, as well as Netanyahu, who is currently the opposition leader and his chief rival in upcoming elections.