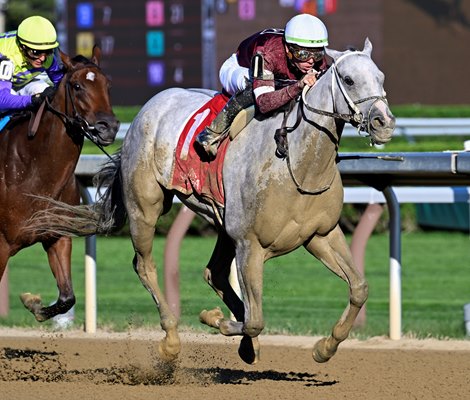 Trained by Hall of Famer Steve Asmussen and piloted by Tyler Gaffalione, the gray daughter of leading second-crop sire Gun Runner   landed last year’s Adirondack Stakes (G2) at the Spa as a juvenile. She entered the 75th renewal of the Prioress off Churchill Downs stakes scores in the June 12 Leslie’s Lady Overnight and July 2 Tepin.

Breaking from post 1, Wicked Halo maintained her rail position in fifth while favored Hot Peppers  utilized her usual front-running tactics through an opening quarter-mile in :21.97 and a half-mile in :44.99 over the fast main track.

Gaffalione continued to bide his time around the far turn in search of racing room and swung his filly four wide at the quarter pole. Hot Peppers maintained her lead at the top of the stretch with Union Lake  continuing to give her all to her outside. But Wicked Halo’s late burst of energy proved superior as she fended off a late rally from 37-1 New York-bred longshot Sterling Silver  to win by a neck in a final time of 1:10.16. Sterling Silver finished another 2 3/4 lengths ahead of Union Lake.

Hot Peppers, who had been entering the Prioress off a runner-up effort in the Aug. 6 Longines Test Stakes (G1), settled for fourth.

Bank On Anna  and Smash Ticket  were scratched

“All the credit goes to Steve and his team,” Gaffalione said. “They brought her over here ready to fire a big one. I was very confident coming into today’s race. We were planning on going to the Test with her, but she had a little bit of a hiccup and got pushed to this, but I thought the race suited her well. There was plenty of speed for her to get a good trip and when I asked on her, she gave me everything she had.”

The Prioress was the fifth stakes win of the meet for Asmussen-Winchell Thoroughbreds, who’s Saratoga meet was capped by a resounding victory from Epicenter  in the Aug. 27 Runhappy Travers Stakes (G1).

Asmussen noted that Wicked Halo’s 2022 campaign has been something of a work in progress.

“We were a little off track early (in the year). She’s very laid back and it took her a few races to get sharp, but I think when we got back to Churchill (Downs), she dialed it up,” Asmussen said. “Her last three runs were really solid. We did plan on running in the Test, but she had a little bit of a (minor) hind foot thing.”

Asmussen said Wicked Halo is likely to make her next start in the Sept. 24 $275,000 Dogwood Stakes (G3) at Churchill Downs.

Bred in Kentucky, Wicked Halo is the second foal out of the Tapit   mare Just Wicked, who captured the 2015 Adirondack Stakes for Winchell Thoroughbreds and Asmussen. A full sister to grade 2 stakes victress My Miss Lilly, Just Wicked has beget two full siblings to Wicked Halo, an unraced 2-year-old colt named Wicked Again and a yearling filly.

This press release has been edited for content and style by BloodHorse Staff.