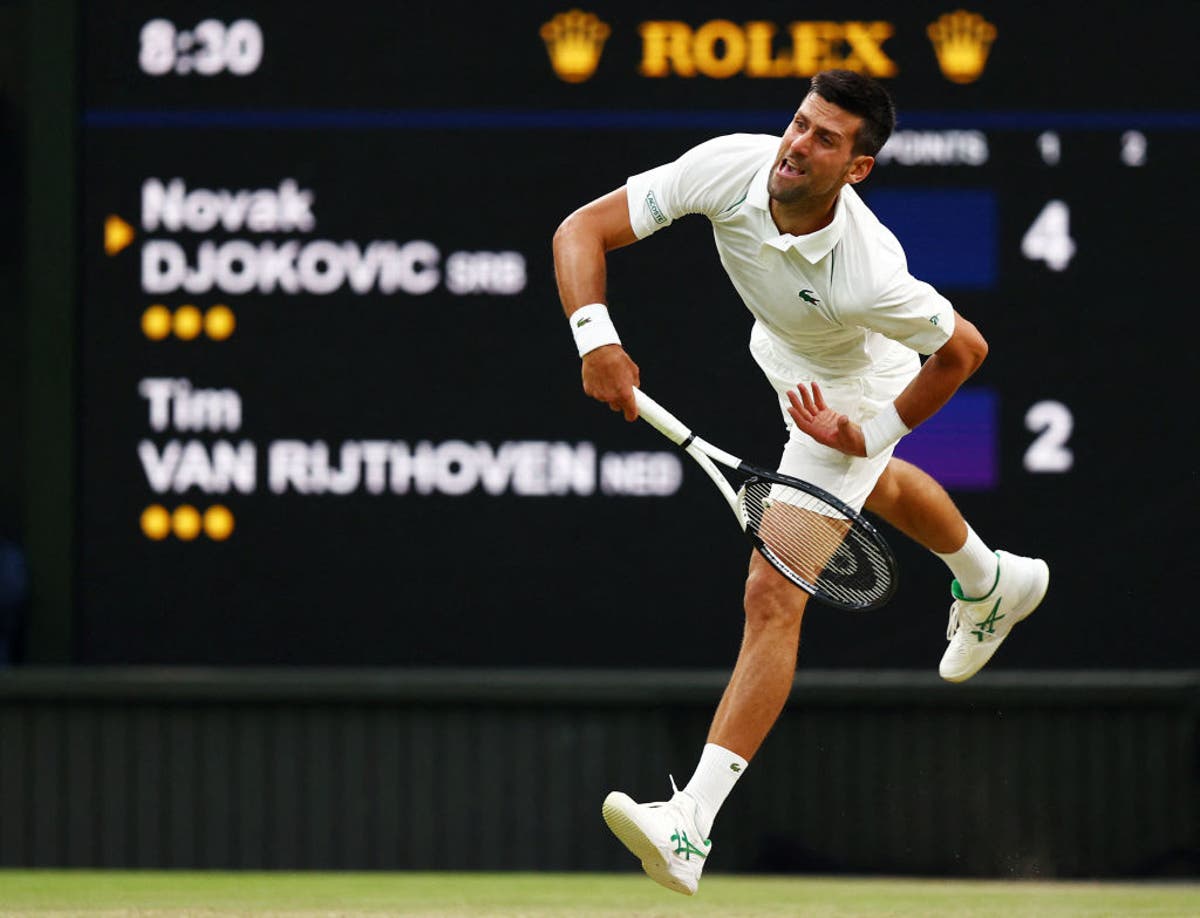 Novak Djokovic looks to continue his march towards the Wimbledon final as the Serbian eyes a seventh crown at SW19 and a fourth successive title when he faces Tim Van Rijthoven for a place in the last eight.

The winner will face Jannik Sinner in the quarter-finals after the 20-year-old Italian defeated Carlos Alcaraz in four brilliant sets on Centre Court. Sinner required five match points to see of the 19-year-old Spaniard, who stayed alive by taking the third set on a tiebreak but was then put away 6-1 6-4 6-7 6-3.

There were mixed results for the British players. Cameron Norrie is through to the quarter-finals of a grand slam for the first time after beating Tommy Paul 6-4 7-5 6-4. He is the last Briton standing after Heather Watson was defeated in straight sets by Jule Niemeier on Centre Court.

There is also a tasty match on Centre Court among the future of the men’s game with Italian Jannik Sinner, 20, battling Spanish sensation Carlos Alcaraz, 19, and both men keen to book a first-ever quarter-final at Wimbledon.

It follows the drama of Nick Kyrgios defeating fourth seed Stefanos Tsitsipas in four gripping sets on Saturday, with the Australian predictably suffering a mid-match meltdown in a heated contest, while Djokovic may have been more interested in the form of Rafael Nadal, who was back to his best in a straight sets win over Lorenzo Sonego.

Follow all the action from day seven, including live updates and results from the All England Club

Van Rijthoven, forehand flowing now, gets a comfortable hold of serve, highlighted by a winner down the line.

Djokovic is also able to rattle out a quick hold and it forces Van Rijthoven to serve it out for the second set.

Committed hitting from the baseline from Van Rijthoven helps him to 30-30 but he slumps the backhand into the net on the Djokovic second serve!

He turns to his box in frustration but Van Rijthoven hangs in the next point despite the heavy hitting from Djokovic. He clips the baseline and then Djokovic runs into the net, as the Dutchman finds the forehand pass!

Deuce and what a point that is! Djokovic puffs his cheeks after Van Rijthoven beats his slice and adds his power, before cutting the drop shot!

Van Rijthoven breaks! Incredible hitting! Djokovic hung on with all his might but could not withstand the Van Rijthoven power and he smashes the winner!

Lovely touch at the net from Van Rijthoven and he looks to have the hold as he launches two big first serves to take control.

But he clips the net with a sliced drop shot from the back of the court, with Djokovic stranded, before Djokovic thrashes the backhand return and gets him back to deuce.

Djokovic’s return game has been brilliant but he lets on slip at deuce – firing long – and Van Rijthoven gets his hold as Djokovic pulls his forehand into the tramlines.

Clutch ace out wide from Van Rijthoven at 15-30 but Djokovic arrows his return around his feet and he nets down low.

Break point, but another big serve out wide finds its mark and from there Van Rijthoven gets his hold.

Van Rijthoven lands an important ace down the middle at 30-30 on his opening service game of the second set and he then whips the forehand winner on the volley.

The Dutchman will look to stay in this second set for as long as he can.

Supreme from Djokovic. A scary forehand winner passes Van Rijthoven at the net and then the lob from Djokovic beats the Dutchman at the baseline.

Djokovic pushes the backhand wide and then a brilliant serve from Van Rijthoven down the middle get shim to 40-30.

The one-hander goes long, though. Another deuce.

Again, the backhand breaks down and it means set point for Djokovic.

And what a winner from Djokovic! He leans into the backhand down the line and steers the shot into the baseline to take the opener!

Hello? Djokovic faces 30-30 and then Van Rijthoven crushes a forehand on the run into his feet as he approached the net!

Van Rijthoven was in the point but the one-handed backhand broke down and Djokovic’s serve moves him to advantage.

Another backhand wide from Van Rijthoven and Djokovic can escpape. The 25-year-old is getting opportunities but taking them remains a big step.

This time Djokovic does get a comfortable service game but Van Rijthoven controls the baseline exhanges to hold without any problems.

Obviously, Come on Tim is a popular shout.

Van Rijthoven takes on a full volley at the net and lands it in the corner before moving to 40-0 with the drop shot. The Dutchman moves into the net to hold to love and that will help him as he gets on the board.

Van Rijthoven seems to be growing in confidence at the back of the court as he settles into the rallies but finding the passing shots is another question. He flashes a forehand wide on deuce and then pops another long on the forehand side.

Djokovic emerges with the hold but it feels much closer than the 3-0 scoreline suggests.