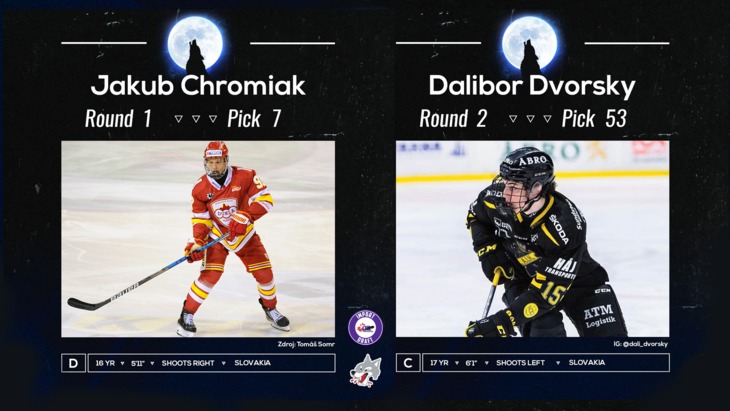 (Greater Sudbury, ON) The Sudbury Wolves are pleased to announce that they have selected two players from Slovakia in today’s 2022 CHL Import Draft.

In the first round, 7th overall, the Wolves selected right-defenceman Jakub Chromiak. During the 2021-22 season, Chromiak played for the Slovakia U18 national team as well as for HK Dukla Trencin U20. In 19 regular season games, the 5’11, 186lbs defenceman had 5 goals, 5 assists, 31 PIM and was a plus 6. He also played 5 games for the HK Dukla Trencin in Slovakia’s top men’s league.

“We are really excited with today’s draft,” said Sudbury Wolves VP & General Manager Rob Papineau. “We got two players that we were very high on. Obviously, we targeted Jakub with the first pick, and we feel he is one of the best young defenceman in the 2005 age group. We were very happy that he available at number 7 to select him.”

Jakub is regarded as one of the top defencemen in the import draft. He has a late birthday and is projected to be a high pick in the 2024 NHL draft.  He is a high-end defenceman with his skill and ability. Chromiak is a strong skater and is a very mobile defenceman with a lot of poise. He can play in any type of situation and has excellent vision. Chromiak is a strong puck moving defenseman who moves well in transition. He is very adept in all three zones and was also a member of the U18 WJC (D1A) Gold Medal Slovakian Team this past April. He is also the brother of Martin Chromiak from the Kingston Frontenacs.

In the second round, 53rd overall, the Wolves selected centre Dalibor Dvorsky of the AIK IF JR of the J20 Nationell in Sweden. In 33 games, the 6’1, 190lbs left shot centreman, scored 20 goals and added 20 assists for 40 points. He also added 43 penalty minutes and was a plus 10. He also played 17 games for AIK in the HockeyAllsvenskan league where he had two goals and assist for three points.

“With Dalibour, he is actually one of the top prospects going into next year’s NHL draft and he is a guy that we highly sought,” added Papineau. “We do understand that he has some options, but we have had a great conversation already to congratulate him. He is a very positive young man, and we look forward to continuing our conversations with him and his advisor.”

Dalibor Dvorsky is a premium talent out of Slovakia who combines a great scoring touch with elite play driving skills. A top prospect eligible for the 2023 NHL Draft, he has competed at many international events including the WJC-D1A where he won gold with our first-round draft pick Jakub Chromiak.  He was only one of only two 2005 born players to represent Slovakia at the most recently cancelled World Junior Championship.